In 2014, Science published a study on digital distraction that reached a potentially alarming conclusion—a majority of people do not enjoy having time to themselves free of their electronic devices. Indeed, the authors of the study discovered that many of their participants were so agitated when left alone in a room with nothing but their thoughts that they preferred to pass the time giving themselves an electric shock (the only form of entertainment in the room was a 9-volt battery that administered a shock when touched). The fact that many digital citizens prefer self-administrating electric shocks to spending time alone and offline may be cause for alarm, but is digital distraction really a problem? 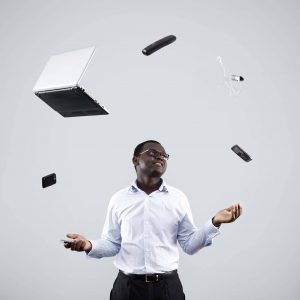 First, it is important to bear in mind that most new technologies—from writing to electronic calculators—have been cause for alarm when first introduced. Socrates notoriously rejected writing, because he believed that once ideas are written down, “they are tumbled about anywhere among those who may or may not understand them” (as reported by Plato, who did write, in Phaedrus). Jump ahead to the twentieth century, however, and one discovers similar concerns expressed about an entire range of electronic devices from calculators to computers. In short, new technologies are often initially viewed with suspicion, because they are assumed to erode our memories and promise to leave us with a population able to access more information but understand less. Just as writing and electronic calculators did not, in the end, prove particularly damaging, it seems likely that our current concerns about digital distraction may be exaggerated. But on what basis might digital distraction be linked to digital learning? To begin answering this question, it is useful to consider another historical example.

Back in the early Middle Ages, most written texts contained no punctuation, no upper- or lower-case letters and no space between words. As a result, the only way to read a text was to sound it out. This meant that everyone, not just young children, read out loud and that a phenomenal amount of cognition was dedicated to simply determining where words started and ended. Introducing space between words and other grammatical marks eventually made reading easier. This in turn freed us to read more quickly and subsequently to turn our attention to higher-level thought processes. Over seven hundred years later, we not only are able to read quickly and silently but increasingly, we are able to read multiple screens simultaneously. So shouldn’t it follow that we’re actually getting smarter?

Notwithstanding the cynics and skeptics (and there are many), at least some educators and industry leaders recognize that what we like to describe as digital distraction may in fact just represent a new type of literacy—a type of literacy that involves the ability to simultaneously read many texts and to respond to these texts just as quickly. While no one wants a student or employee who is unable to accurately complete basic tasks on time, there is no doubt that in today’s work world, multitaskers are a valued asset, especially in fields where reading and responding to information on multiple screens is an integral part of one’s daily work (e.g., traders and air traffic controllers). The challenge, then, is not to eliminate digital distraction but rather to train workers to heighten their focus using the technologies and platforms that are frequently seen as a source of digital distraction.

First, in a classroom setting, studies have shown that students who appear to be surfing the web are in fact often acquiring information related to the classroom discussion or lecture taking place. Bearing in mind that most students are now accustomed to processing multiple channels of information simultaneously, educators who encourage such behaviors can open up opportunities for new forms of engagement. Second, recognizing that digital devices are primarily used to access social media sites, educators can use social media to augment classroom discussions. If you think students are using classroom time to check their twitter account, create a hashtag for your course and encourage students to post messages related to the course content instead. Third, whether you’re delivering a course in a face-to-face setting or entirely online, incorporate online quizzes, surveys and collaborative work spaces into the structure of the course.

For educators, the payback of embracing these strategies is obvious: perceived avenues of digital distraction are harnessed to put the focus back on the curriculum. For students, the payback is also significant: they learn how multitasking can be used to intensify rather than disperse one’s attention.  The problem, after all, is not that we are inherently distracted. Learning how to engage more effectively with multiple avenues of information ultimately holds the potential to enhance rather than compromise our depth of knowledge.

See Twenty Ways to Engage Employees in Mandatory Training so you can rest easier.

Quickly see How a Learning Culture Can Improve Your Organization