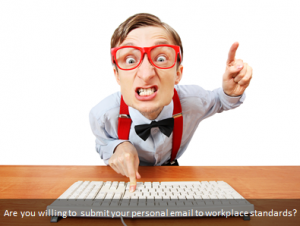 On the other hand, if you’re Secretary of State and an aide informs you of a drone crash in Afghanistan but you hit the reply button and send a personal email that says, “I like the idea of these. How high are they? What would the bench be made of? And I’d prefer two shelves or attractive boxes/baskets…”, you have likely stepped across a line you want to avoid. The drone crash/furniture email is just one of the questionable exchanges that has come to the surface over the past few months as Hilary Clinton’s email has been put under investigation.

Although it seems unlikely that anyone without ambitions to become the next President of the United States would have their email put under the same degree of scrutiny, there is no doubt that Clinton made at least a few workplace communication missteps. Apparently, Clinton exchanged approximately 60,000 emails while serving as Secretary of State and about half of the emails where of a personal nature. Unlike most public officials, however, Clinton ran her own email server, which enabled her to control her messages and as we now know, delete close to 30,000 emails. In her defense, Clinton appears to blame her problems on Apple. In short, she wanted to carry a single device and opted to carry an iPad rather than a government-issued Blackberry, because she wanted to stream all her communications through a single device for convenience. In retrospect, Clinton, whose reputation and presidential campaign has suffered as a result of the email scandal, admits that it may have been smarter to carry two devices and keep all her personal and work email correspondence entirely separate.

Whether or not one feels sympathetic for Clinton or believes her approach to email was a potential security breach, the case hammers home the need for organizations of all sizes to have clear protocols for the use of workplace email accounts. While many employees will scoff at the idea of participating in a training session focused on how to use email, in reality, the number of email communication errors made in most workplaces on a regular basis is much higher than it should be. Among other considerations, all employees should appreciate the following guidelines:

Be concise: Workplace email should be treated a bit like communications at any border crossing. Only say what you need to say. Keep it short and on target without being overly terse.

Avoid hitting the “trigger”: While you should reply to work emails in a timely manner, sometimes it is wiser to wait a few hours or until the next day. Hitting the reply or reply to all options in the middle of a dispute may be tempting, but it is rarely wise.

Avoid writing anything incriminating in an email: Work email stays in the workplace. If you defame a colleague or share personal information, it is permanently in the organization’s archive. While it may seem insignificant at the time, down the line, a seemingly innocuous email may be put back into circulation in unanticipated ways.

Think before you copy other colleagues: Be clear about who needs to be copied on an email and who doesn’t need to be copied. Ensure that only the appropriate recipients are copied.

Don’t use email to avoid talking to colleagues face-to-face: Email can be misleading, time consuming and at times, simply inappropriate. It is no replacement for face-to-face or phone contact.

Don’t use your work email for personal matters: In the mid 1990s, when many people first went online, it was common to have a single email account—either a personal account or a work-related account. For this reason, older colleagues may still use their work email for personal matters, but as a rule of thumb, work accounts should be used for work and personal accounts should be used for personal matters. While the line can get blurry when one is socializing with a colleague, with few exceptions, if the email has nothing to do with one’s work, take the conversation outside your organization’s network. While the stakes may be less high for most of us than they were for Clinton, no one wants to end up having their personal email subjected to the scrutiny of a workplace investigation.