Expanded role and extended role are terms sometimes used interchangeably but in fact, they mean two different things. In a nursing context, for example, an expanded role typically refers to the broadening of a nurse’s work within her profession (e.g., a nurse carrying out a wider range of nurse duties). An extended role, by contrast, typically refers to the nature of a nurse’s work changing to take on new work (e.g., work that may have traditionally been carried out by a doctor). 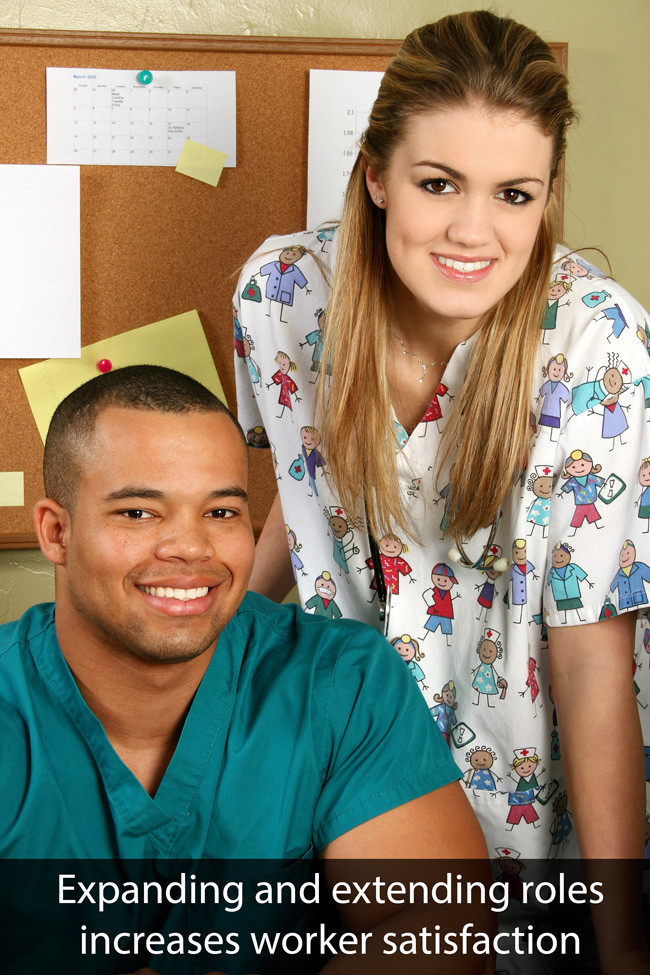 Research, across workplace contexts, generally supports the conclusion that expanding and even extending the roles of workers is a good thing. Workers, who are able to assume more roles in an organization and have a wider general knowledge base, tend to be happier, advance more quickly and stay longer with their current employer. In short, expanding and extending roles increases worker satisfaction and enables organizations to get a better return on their training dollars. It’s a win-win situation. However, expanding and extending roles can be controversial. If, for example, a nurse begins to carry out the work of a doctor but is not afforded the same compensation or status, then, extending roles can create inequities in the workplace that in turn lower job satisfaction.

In the 1950s, the idea of the nurse practitioner emerged as a way to ease some of the burden on doctors while giving a small subsection of nurses a heightened level of responsibility and autonomy, especially within specific types of clinical settings (e.g., anesthetics and psychiatry and in the UK, midwifery). In many respects, the nurse practitioner was conceived of as an extended role (nurses doing work that was once designated for doctors). In the US, the first nurse practitioner programs appeared in the mid 1960s. Today, the U.S. Bureau of Labor Statistics reports that there are over 100,000 licensed nurse practitioners across the nation. On average, nurse practitioners make $95,000 annually, significantly more than most other registered nurses who make on average $69,000 annually.

The compensation for nurse practitioners reflects their vastly extended role in the medical system. Nurse practitioners are able to prescribe medications whereas registered nurses are not. In addition, they are often called upon to perform duties also not typically assigned to nurses, such as ordering and performing diagnostics, managing patients care and communicating test results to patients. Nurse practitioners usually hold a graduate degree in nursing.

By and large, the nursing profession has welcomed the rise of the nurse practitioner. Extending the role of nurses creates more opportunities for advancement in the profession in a clinical context (in the past, advancement for nurses frequently meant assuming management roles that took them away from frontline care). Some nurses, however, have maintained that role extension in their profession is simply meant to ease the burden on young doctors while further exploiting nurses. Nurses who are not nurse practitioners also fear that the introduction of nurse practitioners creates increased hierarchies within the profession and diminishes the necessary work carried out by registered nurses engaged in more traditional forms of nursing care. Finally, understood from a different perspective, the role extension of nurses may be seen to deskill the work of doctors, since work traditionally assigned to doctors, especially young doctors, is reassigned to nurses.

While some of the above critiques may be legitimate, generally, the introduction of nurse practitioners has been well received by nurses and doctors alike. Nurse practitioners are especially valued in rural and remote communities where there are often few doctors and those available often work in hospitals or clinics over an hour’s drive away. In addition, with few exceptions, the extended role of nurses is a factor that makes the profession a more attractive option for young nurses who are not only eager to enter the profession but also to imagine themselves growing within it over time by extending their knowledge and responsibilities.