For several years now, the popular peer-to-peer car service Uber has been gaining popularity and raising controversy. In short, Uber has attempted to maintain the advantages of working with contractors (e.g., not offering health benefits or providing job security) while treating their contractors much like employees (e.g., setting prices and dictating interactions with customers). Last week, the California Labor Commission ruled that at least one of Uber’s so-called contractors was in fact an employee and as a result, the company was ordered to reimburse the driver for her expenses (e.g., car repairs) for the four months she spent working on the platform. While last week’s decision only applies to a single driver, the ruling gives a major boost to a class action lawsuit against Uber, which is expected to be ruled on in August. In short, the ruling suggests that Uber drivers are employees not contractors but if this determination is reified in the class action case, it will have far-reaching effects not only on Uber drivers but on anyone whose work relies on a peer-to-peer platform (e.g., Lyft and Handy employees) and on any company that relies on the so-called 1099 workforce. 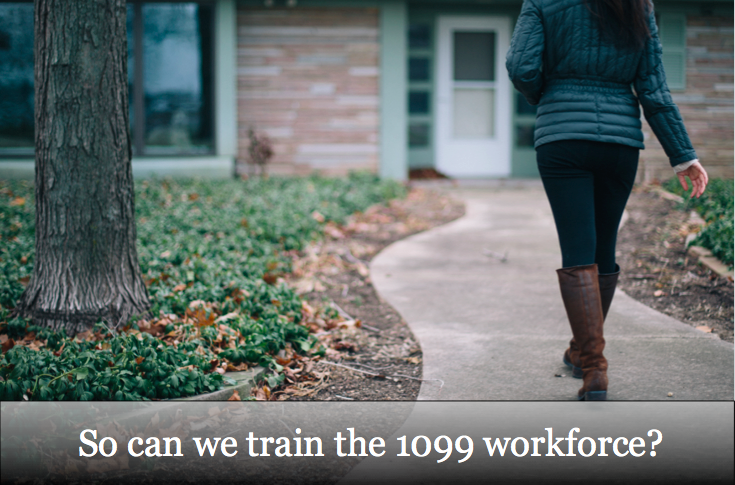 If you’ve ever used Uber, you’ll know that for a fee, Uber drivers and customers find each other via the Uber platform. What many Uber customers don’t know is that unlike Airbnb and many other peer-to-peer platform, Uber drivers, who do own and maintain their own vehicles, are subject to a myriad of employee-type rules. For example, they can’t set their own prices, must play a certain type of music in their cars and must engage with customers according to specific company protocols. More notably, unlike most contractors, Uber drivers who receive a poor review or two often have their contracts terminated. In many respects, Uber—a platform that has at times claimed not be in the transportation business at all (after all, they are a technology company)—has consistently stepped over a line by effectively treating contractors like employees while not offering any of the benefits typically enjoyed by employees (e.g., vacation time, two weeks notice when laid off and proper training).

As discussed in our earlier white paper, “What is the Value of Training Contingent Workers?”, the contingent workforce is growing, largely due to the growing number of workers and organizations taking advantage of peer-to-peer platforms. While training contingent workers was historically unusual, as more companies rely on contingent workers (in some organizations, contingent workers are now a majority), it is becoming increasingly common to onboard and even provide regular training to 1099 workers, but there are risks, and this is where the Uber case is important.

In the case of Uber, drivers report that while they do not receive formal training, the company does have many expectations. When these expectations are not met, they are told their contracts will be terminated unless they complete a training course, which they are expected to pay for out of pocket (the course cost $60 and is offered by a third party). While this may sound unusual, to be fair, Uber is faced with a dilemma. On the one hand, the company can’t train its contractors because offering training would support the workers’ own claims that they are, for all intents and purposes, employees not contractors. On the other hand, by not training drivers, the company puts itself at risk, because it can’t fully control its brand (e.g., drivers don’t always offer a consistent service because they’ve received no training that would enable them to effectively do so). Of course, the situation is equally risky for drivers—without proper training, they can be held accountable for not meeting standards they were never fully prepared to meet in the first place.

So can we train the 1099 workforce? While training is possible, companies who formalize training of 1099 workers may in fact be at risk of blurring the division between contractor and employee. Moving forward, of course, the answer is not to ignore the training needs of the 1099 workforce but rather to find new ways to support contract workers. This may mean, among other things, creating a new category of workers—one that can accommodate a growing demographic of workers who are neither contractors nor employees but evidently need and deserve training nevertheless.